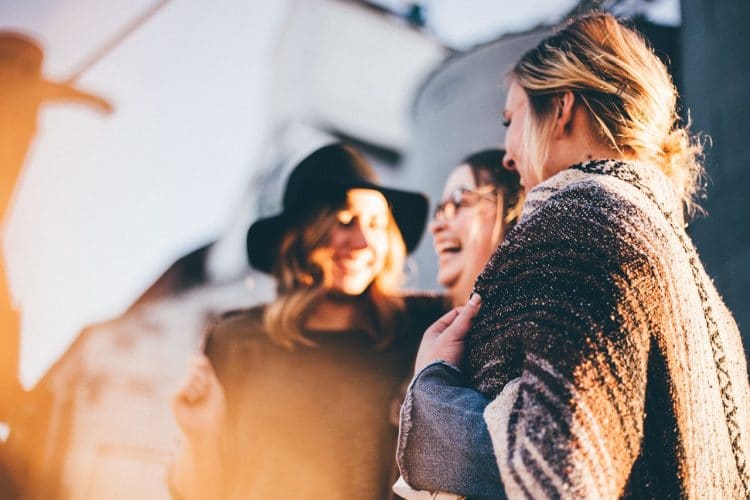 Breathing in and out each other’s strength until it grows and grows into a collective force.

In Women Who Run With Wolves, Clarissa Pinkola Estes writes of the natural urge for women to be together without men from time to time. She discusses the idea that it is a cleansing, healing experience to be solely in the presence of other women. I can very deeply relate to this urge, as close female friendships have always been of upmost importance to me, even at a very young age. There is such a deep and unspoken understanding that bonds women- one that is immune to time and distance.

Recently, nine university friends of mine flew from all over the United States (and one from Australia) just to be together for a few days. Almost immediately upon seeing each other, we entered what Estes calls Rio Abajo Rio (river beneath the river) or, as I like to think of it, a “world between worlds”. This is our story…

One month ago, a group of ten women traveled tens of thousands of miles collectively to be together for five days on an island off the coast of Massachusetts. Full time jobs, boyfriends, foreign visas, hours of traveling and financial restrictions could not have kept us apart one more day. It had been two years since we had all been together under one roof, and we decided that enough was enough. The union at Boston’s Logan International Airport was epic- running, screaming, squealing, jumping, hugging, throwing bags- and without any regard for the judgmental onlookers. We didn’t give a shit because we could FINALLY relax… we were together again

You see, as women we carry burdens each day as a natural inclination. We pick up messes left behind by others more careless, protect those weaker and smaller than us, and are often the emotional strength of our households. When we come together, though, we exhale. All that weighs on us can be released… let go… because, without having to say it out loud, we all understand. That unspoken understanding is what allows us to fully be ourselves.

Estes writes
Sometimes it is hard to get men away so women can be alone with each other. I just know that in ancient times women encouraged men to go away on “the fishing trip”. This is a ruse used by women since time immemorial to make men leave for a while so a woman can either be by herself or be with other women. Women desire to live in a solely female atmosphere from time to time, whether in solitude by themselves or with others. This is a natural feminine cycle.

Male energy is nice. It is more than nice; it is sumptuous, it is grand. But sometimes it is like too much Godiva chocolates. We yearn for some clean cold rice for a few days and a clear hot broth to clear the palate. We must do this from time to time.

We were like ten little fairies on the island that week. We pranced around the yard naked after long days at spent by the sea, oblivious to any nosy neighbors. We floated in and out of activities and conversations as it suited each of us individually, and followed every hedonistic pleasure – ate what we wanted, drank what we wanted, and smoked what we wanted…. Whenever we wanted. Our days were like a beautiful dance. There was an innocence to these fairies, as we indulged and received immense pleasure from such simple things and shared love freely with one another.

However, although there was a “fairy-like” element to us there was also a very earthy, sturdy, and strong presence to each and every one of us, as if breathing in and out each other’s strength until it grew and grew into a collective force. We laughed from the gut, until the deepest part of their belly jiggled uncontrollably and released all of the years’ burdens. We used vulgar language, told dirty jokes, and were completely and utterly inappropriate…. And we laughed and laughed….Our laughter acting as medicine for past break ups endured, losses of loved ones, losses of jobs, and hurt feelings.

In the same passage about the “fishing trip”, Clarissa Pinkola Estes also says:

…a little obscenity can help to break a depression. And it is true that certain kinds of laughter, which come from all those sories women tell each other, those women stories that are off-color to the point of being completely tasteless… those stories stir libido. They rekindle the fire of a woman’s interest in life again. The belly Goddess and the belly laugh are what we are after.

So in your self- healing trove, put small “dirt stories”…. This diminutive form of story is powerful medicine. The funny, “dirty” story can not only lift depression but can cut the black heart right out of rage, leaving a happier woman than before. Try it, you’ll see.

The week was a magical potion of vulgarity, innocence, pain, laughter, and joy. The contrast of earthy, raw, nakedness to glowing, sparkling, fairy-like beauty was proof of our depth.  At the end of the week, when all bags were packed and the house was tidy again, we looked around and smiled at each other. We smiled because we knew our secret, and we knew that beautiful secret would be left with one another until next time.

You see, we have the ability to morph into what we need to be in any circumstance – a nurturer, a provider, a fierce fighter, a lover. But, from time to time, we need to just “be” with one another. From the beginning of time, we can see examples of women as healers of all sorts and it is crucial to our future that we protect that sacred gift.

We must share these stories with one another and be living-breathing examples of the divine feminine power that is within us. Madeline Albright says that: “There is a place in hell for women who don’t help other women”, and I believe this to be true.

Coming together to share our time, and put aside the mundane tasks of our every day is a cleansing and healing activity that I highly recommend for every woman.

She lives in St. Neots, England, hosts The Sacred Womb® Podcast, is currently writing a book and is an avid potter.

KEEP IN TOUCH (I'm not on social media).

Burnout is all-too common. Eventually our body reaches a tipping point and says ‘no more’. There is another way! Tracking our cycle keys us into our natural rhythm.

A Menstrual Medicine Poem created in the juiciness of a winters Moontime! This is for all my fellow Moon Witches out there. Let’s fly across that midnight sky!

I talk to Jane Bennett, co-Author with Alexandra Pope of The Pill; Are You Sure It’s For You? on what the Pill actually does and the natural alternatives.